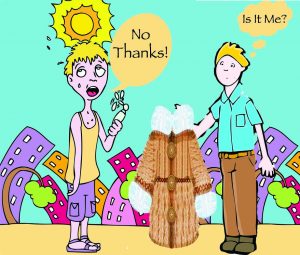 An experience with a salesperson taught me how customers buy for their own reasons, not the salesperson’s. I was leaving an organic food convention when I noticed a doughnut stand vendor who had a significant black eye. Bemused by his unlikely presence at the convention, I asked him how business was. He complained that his “beaten up” appearance must have been slowing down business, because usually everyone loves these doughnuts. Apparently it hadn’t occurred to him that  organic food people probably wouldn’t be good doughnut customers.

It’s human nature to presume we play a role in what people do. In reality, a lot less of what people say and do is caused by us than we think. People generally think and do things for their own reasons, rather than because of us.

In the same regard, Salespeople over-estimate the influence they have on their customer’s decision-making. For example, salespeople feel it’s important to get customers to like them. I can think of instances when I bought from salespeople I didn’t particularly like. I bought from them anyway because they had the best product.

When salespeople over-estimate their influence, it obscures the real reasons why customers decide to buy or not. This will be detrimental to a salesperson’s learning and improving. For example, a young consumer electronics saleswoman shows a home audio system to a couple. The woman in the couple liked it, but the man hemmed and hawed and finally said “no”. He wouldn’t explain why. The saleswoman theorized that he didn’t buy because the customer thought she was too young to give electronics advice. This reinforced her belief that consumers have a hard time trusting electronic advice from young women. In reality, he didn’t buy because he felt assembling a complicated audio system would be overwhelming. He didn’t state this because he was embarrassed to admit it in front of his girlfriend.

This saleswoman’s misinterpretation will interfere with her learning and improving. Instead of learning that customers won’t buy when they feel overwhelmed, she thinks she needs to make extra effort displaying her expertise. Her presentations get more technical, which causes her to overwhelm more customers. Eventually she decides it’s just too difficult for young saleswomen to sell consumer electronics and she quits.

Bear in mind there’s a human tendency to feel overly responsible for the actions of others. When salespeople keep this tendency in check, they’re rewarded with accelerated learning and success. More information is available about the reasons customers buy  on my website and in my book which is now also available in Spanish.

Posted in Selling To The Point